Earlier this year I wrote about how for the first time in a long time, due to rising inflation, I Bonds (inflation bonds) looked appealing. After a couple more months of inflation data, they look even better now.

If you have cash on hand that you are confident you will not need in the next 12 months, you should consider purchasing an I Bond.

And you should do so before April 30th.

Why do they look better now?

Recall that an I Bond is composed of two parts that determine its total interest rate—a “fixed rate” and an “inflation rate”. The fixed rate on an I Bond is set when you purchase, and that rate never changes. The inflation rate, however, changes every 6 months based on the rate of inflation.

So, on November 1, 2021, when the U.S. Treasury Department announced that the new I Bond inflation would be 7.12%, that was exciting, since it meant that an I Bond purchased during that time would pay you 7.12% (annualized) for the next 6 months. But it wasn’t that exciting, since there was still the chance that inflation would cool off and I Bonds would subsequently pay you a much lower rate after those first 6 months.

Now, here we sit months later, and we know that inflation hasn’t cooled off. It’s stayed quite hot. The March CPI numbers released last week showed that CPI-U increased 4.81% in the last six months, or an annualized rate of 9.62%. According to depositaccounts.com, that 9.62% should be the next rate for the inflation rate portion of I Bonds to be announced by the Treasury Department on May 1, 2022.

So now you can buy an I Bond with the knowledge that not only will the first 6 months pay a great rate, but the next 6 months after that will be even better.

Why should I buy before April 30th?

April 30th is a magic date because it’s the last day that you can buy an I Bond and still get the current 7.12% rate applied to the first 6 months that you hold your bond. If you buy after April 30th then you’ll have missed out entirely on the 7.12% rate.

“Wait, Andy. I thought you said that you expect that rate announced on May 1st to be 9.62%. Why would it be a bad thing to get that rate?”

Whereas if you wait until after April 30th, you’ll be back in the same place we were in last November—you’ll know that you have 6 months of a good rate, but you don’t know what will happen after that. Exciting, but not too exciting.

See the chart below from Michael Kitces to get a sense of the schedule for when rate changes take place depending on when you buy your bond. 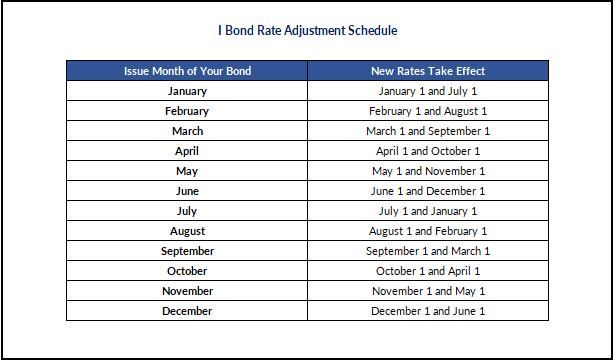 A few final things to keep in mind if you’re planning on purchasing an I Bond in the near future:

How to buy them. I wish that we could buy I Bonds in client accounts, but alas we cannot. If you want to purchase an I Bond, you'll need to create an account on TreasuryDirect.gov and buy them electronically. Or, if you’re reading this in 1990, you can buy paper I Bonds using your refund when you file your taxes.

There’s a limit on purchases. Unfortunately, you can’t purchase an unlimited amount of I Bonds. Your purchases are limited to $10,000 per person per calendar year. But there are ways you can increase this limit a little bit. A married couple can purchase up to $20,000 by buying them in each spouse’s name. A married couple with two children could purchase up to $40,000 by buying some in their kids’ names. You can even purchase I Bonds for other entities, such as a trust or business.

Where to pull the cash from. In my opinion, the best source of funds to use for purchasing an I Bond is your emergency fund. I wouldn’t drain your emergency fund too low, but this is an easy way to make at least some of that cash you keep on hand work a little harder for you and keep up with inflation.

Photo by Jp Valery on Unsplash