One of the most common questions I get goes something like this: “Do you know of anywhere I can earn interest on my savings? My bank is paying me nothing.” For a while, “high yield” savings accounts were an acceptable answer to that question. You could earn 2.5% on your savings at places like Ally Bank or Marcus, but even those have flattened over the past couple years and are now only paying 0.50%. That’s much better than what most big banks are paying, but it’s still not much. Unfortunately, due to the recent surge of inflation, this problem only becomes harder to stomach since the purchasing power of your cash is eroding away as long as it sits at the bank earning little to nothing. The good news is that that surge of inflation has also provided a solution in the form of a long-forgotten instrument: the “I Bond”.

What is an I Bond?

The Series I Savings Bond—aka the I Bond—is a bond that earns interest according to the rate of inflation. It’s issued by the US Treasury Department and is backed by the full faith and credit of the US Government, which is about as close to risk-free as you can get in the investment world. To serve its goal as a hedge against rising inflation, it has two-part structure to determine the interest rate—a “fixed rate” and an “inflation rate”. These two rates get added together to make the “composite rate”, which is the actual rate you will receive as an I Bond holder. The fixed rate, as you might guess, stays fixed for the life of your bond. For bonds being issued right now, the fixed rate being offered is a whopping 0%. The inflation rate on the other hand, is recalculated every 6 months based on the Consumer Price Index for Urban Consumers (CPI-U).

It’s this piece of the equation that makes I Bonds so attractive right now. The current inflation rate for I Bonds is 7.12% annualized. So even though the fixed rate is contributing nothing, that still makes for a composite rate of 7.12% annualized. For context, that’s the highest rate for an I Bond since May of the year 2000! See the chart below from Michael Kitces. 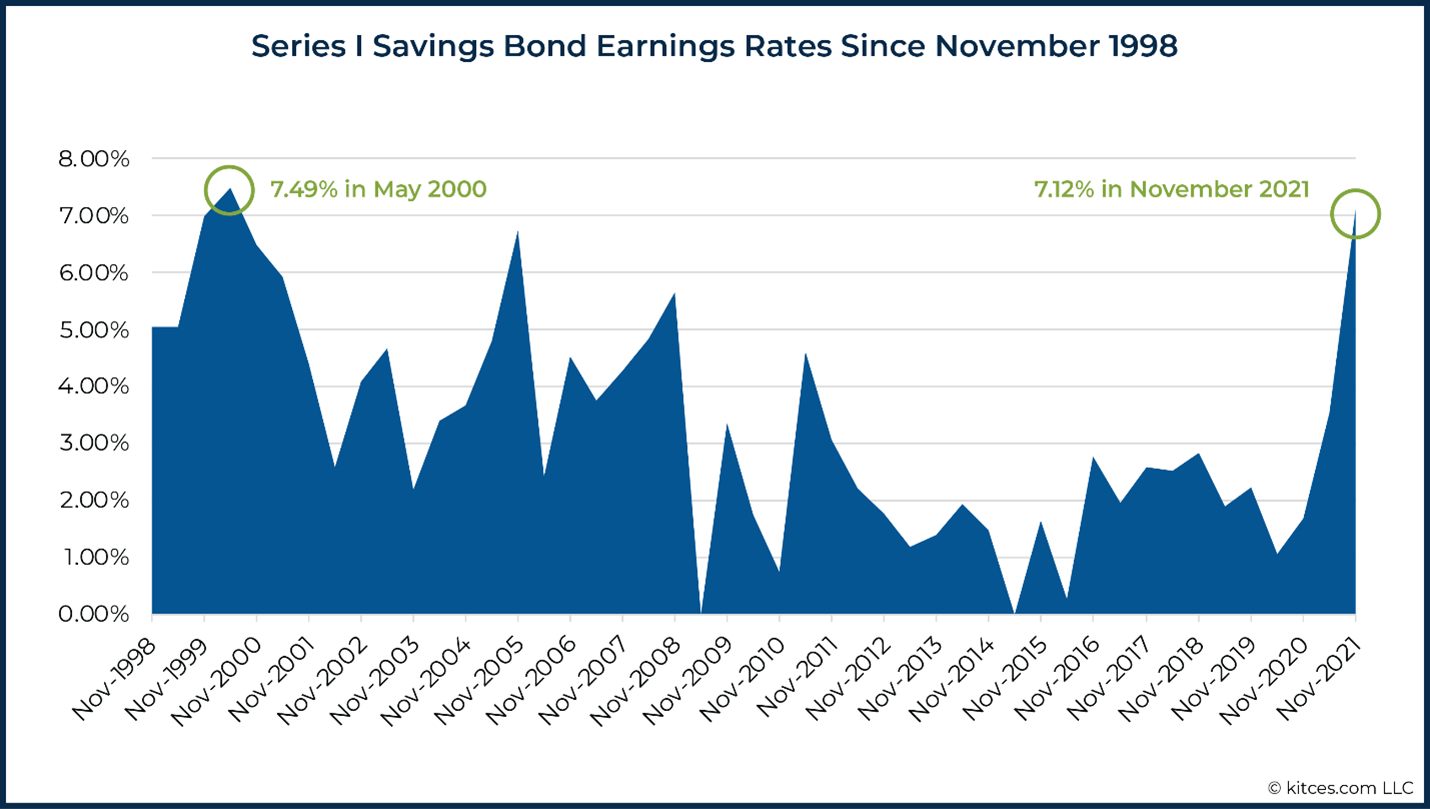 The primary hurdle when deciding about using your savings in the bank to purchase an I Bond concerns liquidity and redemption rules. You cannot redeem your I Bond until at least 1 year after you purchase it. Even then, if you redeem your I Bond any time between 1 and 5 years after purchase, you forfeit the preceding 3 months of interest. Additionally, your purchases are limited to $10,000 per person for each calendar year. So, a married couple could purchase $20,000 in I Bonds between the two of them. A couple with 2 kids could purchase $40,000 by putting two of the bonds in their children’s names.Finally, one last thing to keep in mind is that because the inflation rate portion of the I Bond is recalculated every six months, the composite rate on your I Bond will also change every 6 months. So, while it’s easier to quote the rate of an I Bond as an annual rate for purposes of comparing it to other savings rates, the I Bond’s current composite rate is only guaranteed for the first 6 months. After that, the composite rate may decrease. Then again, it could also increase, depending on what happens with inflation.

I Bond vs. High Yield Savings vs. Big Bank Savings

Let’s get a sense for how the I Bond compares to the most likely alternatives for savings, your “high yield” savings accounts and savings account held at some of the big banks (Chase, Wells Fargo, Bank of America).We’ll look at four different purchase amounts from $10,000 to $40,000. We’ll assume that your holding period for this bond is 1 year. And even though we know that the current rate is only guaranteed for the first 6 months, we’ll keep it level for the full 12 months since it could go either way after that.See the table below for the comparison.

Not a bad increase on your savings while still keeping it effectively risk-free!

Like anything, the appeal of the I Bond totally depends on your circumstances. For any savings that you expect to need within a year, the I Bond’s 12-month lock up period takes it off the table as an option for that cash.On the other hand, those of you with lots of savings in the bank—amounts well beyond the I Bond limits discussed above—will probably be frustrated by the relatively “small” amounts of I Bonds that you can purchase.But in my opinion, for any savings that you’re confident you won’t need to touch for at least 12 months, taking that out of your high-yield or big bank savings account and buying an I Bond is a no-brainer. If you’re at all worried about inflation, this is a nice way to ease that concern somewhat, since at least this portion of your savings will preserve it’s purchasing power.If you’re interested, you can read up more about them for yourself on the TreasuryDirect website and should you decide you want to pull the trigger, you can buy them directly from there.

Banner Photo by olieman.eth on Unsplash