A few years ago, in the Tax Cuts and Jobs Act of 2017, President Trump’s revised tax plan was one of the biggest changes to the U.S. tax code in history. Even though many of the changes in TCJA are scheduled to sunset in 2026, the outcome of this week’s election will have a major impact on the future of the tax code. If President Trump wins reelection, he will almost certainly attempt to make permanent many of the TCJA changes, whereas if former Vice President Biden wins, he’s already proposed the changes he’d like to see.

This piece focuses on those changes we’d see if Biden does get elected, specifically the changes at the individual and household level.

If you make more than $400k, you'll pay more taxes

Apparently, $400,000 is the dividing line. With income above this amount, you’ll be impacted by the changes below. Notably, it isn’t clear from Biden’s proposal whether this $400,000 threshold applies to single filers, married couples, or both. 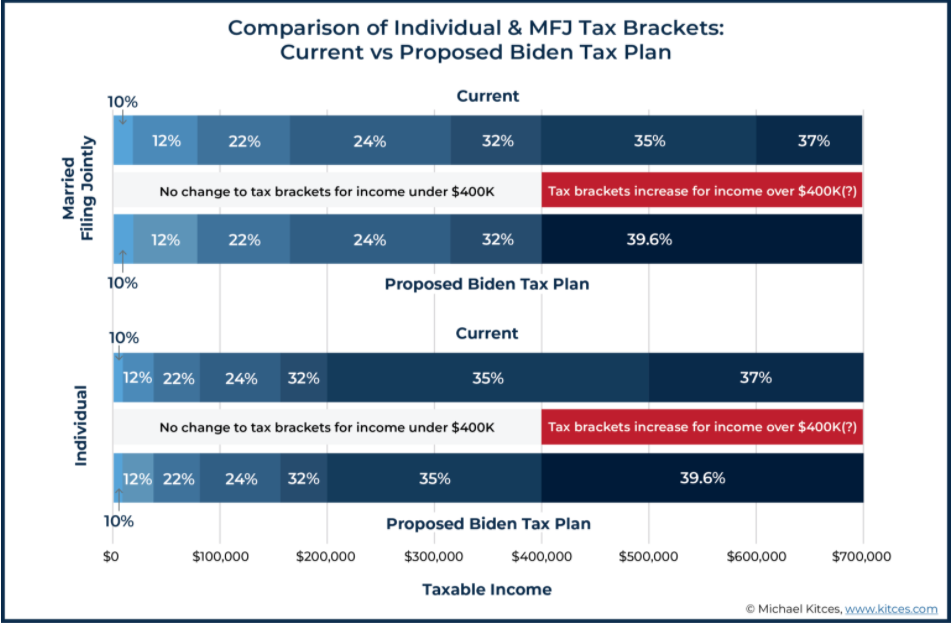 Other changes that will mean more taxes

While the above changes specifically impact taxpayers earning over $400,000, Biden’s proposal does include some other changes which aren’t tied to that magic number.

Some good news - new and enhanced tax credits for families

Not all the changes proposed by Biden’s plan are tax increases. For many families with children, or people with aspirations to buy their first home, they may find their tax bill goes down under the new plan.

Even if Biden wins the election, it isn’t yet clear that there are any sure-thing planning moves to make before the end of the year. However, there are some options to keep an eye on.

For example, some in high tax brackets should consider pulling deductions forward while they still have maximum value. Those in the highest tax bracket should consider pulling income forward before the top rate increases. Those with appreciated assets and one foot in the grave may think about kicking the bucket early so that their heirs can inherit those assets with a stepped-up basis (KIDDING!). Hopefully the time between the election and the end of the year will provide more clarity on what moves to make.

And if Biden loses the election, well, then you’ve just wasted about 7 minutes of your life that you’ll never get back. Cheers!